Once again, Breakfast is a story to be told. This time, because I’m heading to Munich, and will be traveling on an A motorway for most of the trip, I expected to see Service Areas, with restaurants, all over the place. But, as I traveled along, I kept missing the exits, so I eventually pulled into a Rest area that showed that it had gas, and food, but was disappointed in the choices of food.

These gas stations are pretty extraordinary, when compared to US gas stations, but nevertheless, I wanted to get a proper breakfast, and was disappointed to find that I could select from sandwiches, pastries, and a few other items, none of which were what I was really looking for. So, I grabbed a sandwich, and a Cappuccino, and called it a day.

More about the autobahn

Once again, I was truly astonished at the closing speeds of the cars behind me. My GSA will comfortably run at about 75 MPH, but I was approached by a Black BMW that had to be doing in excess of 120 mph. I realize that these drivers are skilled, but the idea that they’ll be in a position to make changes and corrections, if someone else does something stupid is unrealistic. Nevertheless, when in Germany, do as the Germans, right?

And, a shout out to all of my Audi buddies reading the Blog. I was quite surprised at the number of B5 A4 cars that I saw today. Usually, the Autobahn is full of new cars, almost to the point of being exclusive, but today was Audi B5 A4 day. So, Dave, and others, kudos to you for choosing the car that lasts forever in Germany.

The Road to Dachau

This morning, the weather was colder, much colder. Temp’s ranged from 55 to 67 F, and as I was riding, with 25 miles to go, it started raining again. I continued riding along, putting up with the rain, but it was so cold that I decided to put on my inner liner for my mesh jacket. The inner liner really helped to protect me from the cold wind and rain, and when I arrived at Dachau, it was still raining, so I kept wearing the liner, assuming that it would be quite cold while doing the tour.

I arrived at Dachau, and found, once again, that I can sure read a GPS just fine, but I can’t read German road signs. As a result, I was confused about where I was supposed to park for Dachau, so I ended up passing the entrance (which had cones blocking it anyway), and made a loop around the block. I arrived back at the parking lot entrance, and this time, even though it was coned off, I pulled in, and was treated to Rock-Star parking.

3 Trips to the bike (No rest for the wicked)

After parking, I made my way to the visitors center, purchased an Audio Guide, and thought about how to proceed. With all of my gear fastened to the bike, I was not really in a position to change into shorts, and a shirt, so I wore all of my riding gear, and started the tour.

Just after starting the tour, I thought about the bike, and I wanted to be sure that I had locked the front fork, so I headed back to the bike from the exhibits. The trip is about 3/10 mile round trip.

I started the tour, and immediately found that while wearing my jacket, and my liner, my arms did not have sufficient mobility to hold the audio guide up to my year, so I headed back to the car to shed some clothes. This time, I got smarter…

I took off both layers of jacket, and locked them to the bike, using my new Mirror Locks, which were purchased at the BMW MOA Rally. These locks are attached to the base of the mirrors, and they allow you to lock a cable to them, for just about any purpose. So, I took out a security cable, ran it through the jacket and the liner, and connected the two ends to the mirror locks. Now, my jackets were secured, but there was another problem to solve.

The audio guides on this tour don’t come with headphones, instead, you’re supposed to hold the guide up to your ear, and listen. This is a bit of pain in the ass, considering that there are about 100 or more audio hot-spots. So, I decided I’d use my Bose Noise Cancelling headphones, and instead of using them via Blue Tooth, I’d use the provided cable, and a 3mm jack on the audio guide to let me listen without the nonsense of holding up that damn audio guide for a few hours.

With all of this behind me, I started to tour Dachau. Now, let me tell you that it’s hard to be prepared for what you’re about to see as you make your way through the camp, and read the stories at each of the exhibits. It seems that the story is a gruesome one, but with each new exhibit, the level of horror increases. Thinking about the people that did Hitler’s bidding for him, it’s hard to see how he managed to find so many people who were so filled with evil and contempt for their fellow human beings. Wow, the entire 3rd Reich was full of some of the most horrible people that the Earth had ever seen. Hard to imagine, really…

The first thing you see as you’re entering Dachau is the main gate, which is an iconic representation of the horror and humiliation. The Gate includes the inscription “Arbeit macht frei”, ( work sets you free) which was there to make it clear to the prisoners that they were being rehabilitated, whether they wanted it or not.

I toured the barracks, the crematoriums, the gas chamber, and the roll-call area. Each had a story to tell, and each lays out a different way of inflicting pain and suffering on the prisoners.

The Museum and prisoners stories 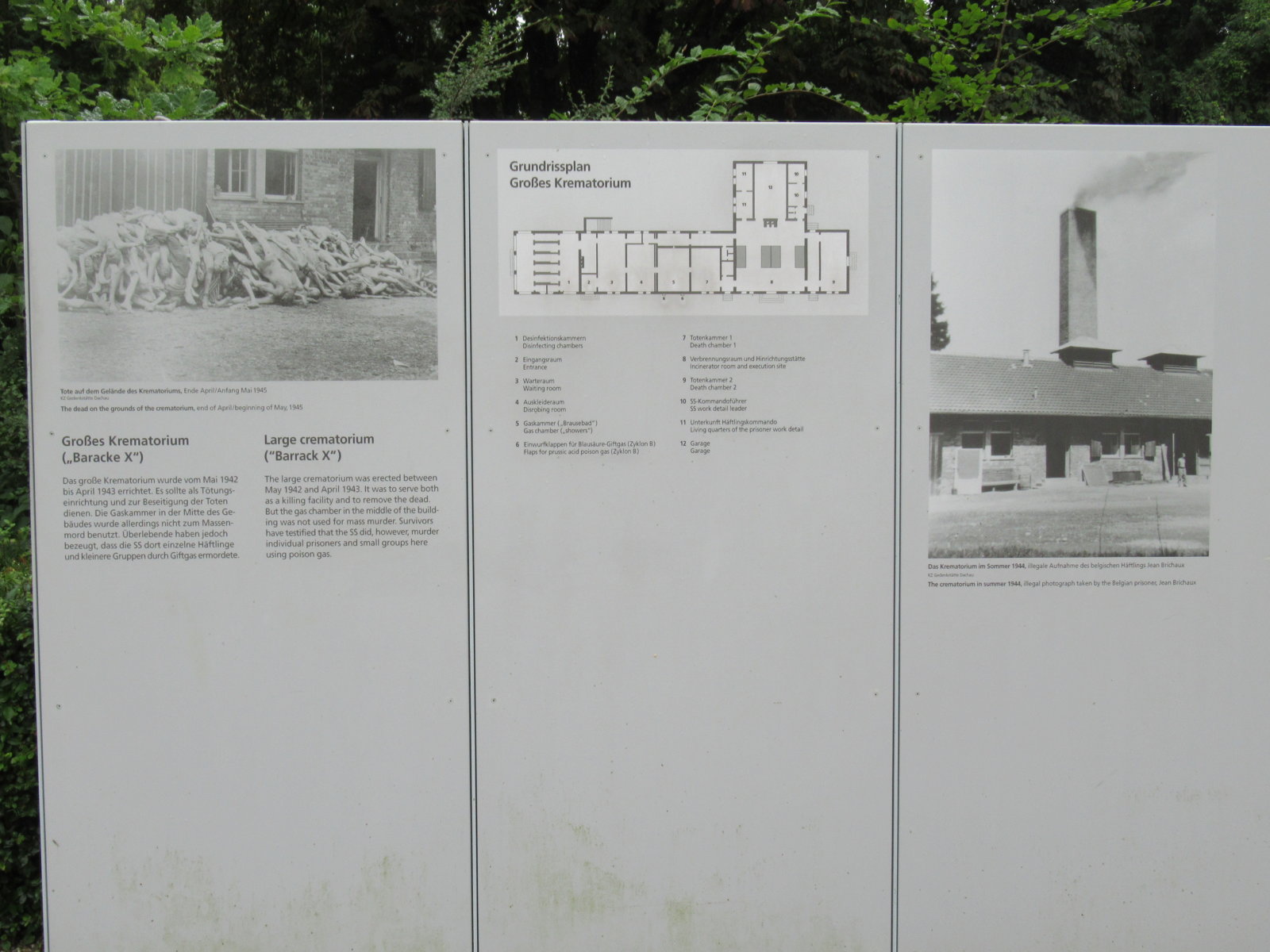 The Crematorium and Gas chamber

Since the “incident in Amsterdam”, I’ve become a religious zealot about securing the bike. So, I’ve been communicating with the hotel, ensuring that I’d have a secure place to store the bike. The hotel manager/owner, offered to let me park my bike in their personal garage space. So, when I arrived, the garage door was open, and it was available for me.

When I checked in, the owner (Martina) looked at me, looked at the bike, looked at all of the gear and said… I think the room is too small for you. Let me see what I can do. She immediately gave me a larger room, which would be big enough for me, and my gear. What a sweetheart to be so kind, and welcoming. It’s really awesome to see the all of the goodness that exists in people, and I’m really lucky to be able to get more than my deserved share of it.

The room is really quite beautiful, and I expect that the King Size bed will also be really comfy.

I asked the hotel owner for a recommendation for a restaurant where I could get some good Bavarian food, and a good Bavarian beer. As it turns out, the village I’m staying is very small, and there are only two restaurants, neither of which would be a good choice. So, she sent me to the next village, to a restaurant that’s attached to a hotel. It was about a 2.5 mile ride, during which I broke one of my rules.

You know that I’m a big fan of All the Gear, All The Time, but I convinced myself that the 2 mile trip, on back roads only, would be safe, so I put on shorts, my riding jacket, a helmet, and headed to the restaurant.

I had something called Scheeinbraten mit kartoffelknudel und salatteller, which translates to Roast pork with potato dumplings and salad. But, let me tell you, that’s not the end of the story. Just have a look.

But, if that’s a potato, then I’m superman. let’s look a little closer.

I was feeling especially adventuresome, so I also decided I’d have a little Bavarian dessert. As was the case with this dish, and everything on the menu, I wasn’t really sure what I was ordering. In this case, I ordered Chocolate Mouse, and ended up with this assortment of deliciousness.

Update from BMW dealer in Estonia

Well, I’ve heard back from Marten, the Service Manager at the BMW dealer in Tallinn, Estonia, and he’s confirmed that he’s ordered the parts, and will be prepared to replace the gas tank filler mechanism when I arrive. We’ve also briefly discussed the front brakes, and he will flush brake fluid, and look at the mechanical state of the brakes.

Marten has also confirmed that he’s subscribed to the Blog, and will be monitoring my trip, to see what else might go wrong, so that he can be prepared. I suspect that he’s also monitoring it because he wonders, “who is this crazy American that wants to travel around the world. Perhaps, I can help.”

Let me say what a joy is is to be able to experience the feeling of camaraderie that BMW Global riders talk about when traveling, and when something goes wrong. The BMW Motorcycle is known for it’s ability to go anywhere, and even in the best of times, this would not be possible if the dealer service network was not up to the task. Thank you Marten!

What will tomorrow bring

I still have a few decisions about tomorrow’s agenda. There is a Glockenspiel in Munich that is supposed to be awesome, and it runs each day at 11 AM, 12 noon, and 5 PM. In addition, there is a castle that is nearby, and also the BMW museum, which might be fun.

Cliff Musante is a technologist, business leader, motorcycle enthusiast, father, grandfather, and more. In June, 2013 his passion for motorcycles was revitalized, and he set out to ride across Patagonia. Since then, he's logged thousands of miles, ridden across the US, and on July 10, 2019, he began a 120 day trip through Europe, and then on to Russia, China, and parts East. This 'Blog is the story of all of his adventures.